You are here: Home / cooking / The Baking Bug is Biting…. 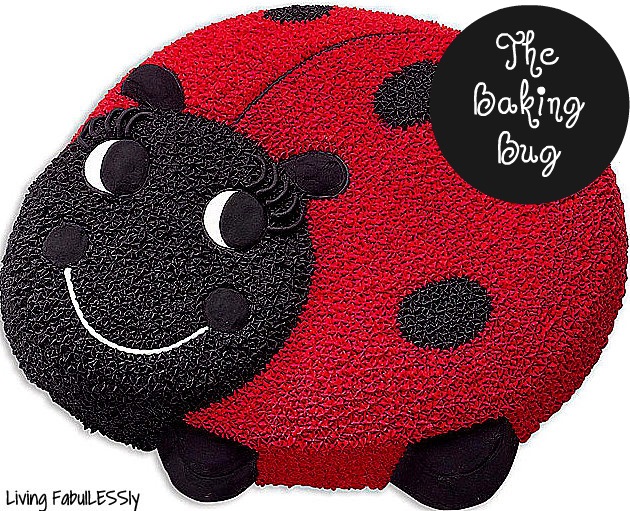 For some reason, I am going through a massive urge to bake lately. Perhaps it’s due to necessity, since I’m forcing myself to make more of our snacks at home to cut down on all the processed foods that we eat around here. Maybe, an old flame who’s coals have long been banked is just finally being rekindled (I did originally start going to college to train to be a pastry chef- but my plans just changed over time).

Whatever the reason, the baking bug always seems to bite me at ~12:30-1:00 in the morning…every morning. Seriously! My family comes out most mornings interested to see what yummy goodie the ‘baking elves’ (not to be confused with those sell-out Keebler guys) has left on our kitchen counter. Let me entice you with what’s been smellin’ up my kitchen lately….

The first thing I whipped up was homemade granola bars. My kids are constantly bargaining for a ‘nack’ and man, do we go through pop-tarts, fruit snacks, granola bars, and the like! Even with coupons I can still spend my weight in ‘nack food’ for their hungry ‘lil tummies, so I knew there had to be a better way. A quick trip to Google (and help from StacyMakesCents.com) and I found out I was right! A healthier, CHEAPER version was close at hand with ingredients I already had in my pantry- who knew?!

I got aggravated after I had already creamed together the butter and brown sugar when I realized I didn’t have old-fashioned oats on hand- only quick oats. No matter- in recipes where you are baking things like this, just sub one for the other! Crisis averted! I decided to double the recipe but for some reason didn’t change the size pan I used to bake it (i.e. 8×8 vs. 9×13) so I wound up with really thick chunky bars instead of thinner more numerous bars. Regardless, I still had plenty with which to fill my large tupperware container!

Overall, I think they turned out fairly tasty but I would do some things differently next time. I’d use a bigger pan (duh!) and I’d probably toast the oats- it would bring out a yummy nuttiness that I feel is lacking greatly. But Tim and the kids loved ’em and the tupperware is esssentially empty, so I guess they couldn’t have been too bad!

Next, I decided to dabble with fruit as I have a bunch of frozen blackberries that I wanted to use up- enter Blackberry Oatmeal Breakfast Bars (courtesy of FriendsFoodFamily.com). Talk about melt in your mouth scrumptiousness!! How can you go wrong with oats, brown sugar, butter, and cinnamon topped with a blackberry sugar reduction and then more brown sugar streusel? HEA-VEN!!!!!

There’s nothing I would do differently next time other than make sure I have more blackberries on hand so that I can totally double or triple this recipe. It makes a gracious 32 bars (or 16 if you want them to be bigger like I did) and if you put the computer down right now and go in your kitchen to make these I swear you won’t be sorry. Just promise you’ll come back and finish reading my post when you’re done.

I always make a dessert each week that we’re allowed to indulge in over the weekend and this past week I tried my hand at Italian Cream Cake. I was inspired by my favorite dessert from our local Italian joint, Marabella, where their Cream Cake is DEE-VINE! I found a recipe on Ree Drummond’s site, followed the instructions on Sweetapolita’s site instead, and made the executive decision to make them into cupcakes so they would be ‘portion-controlled’ (after all, we are trying to watch what we eat!) 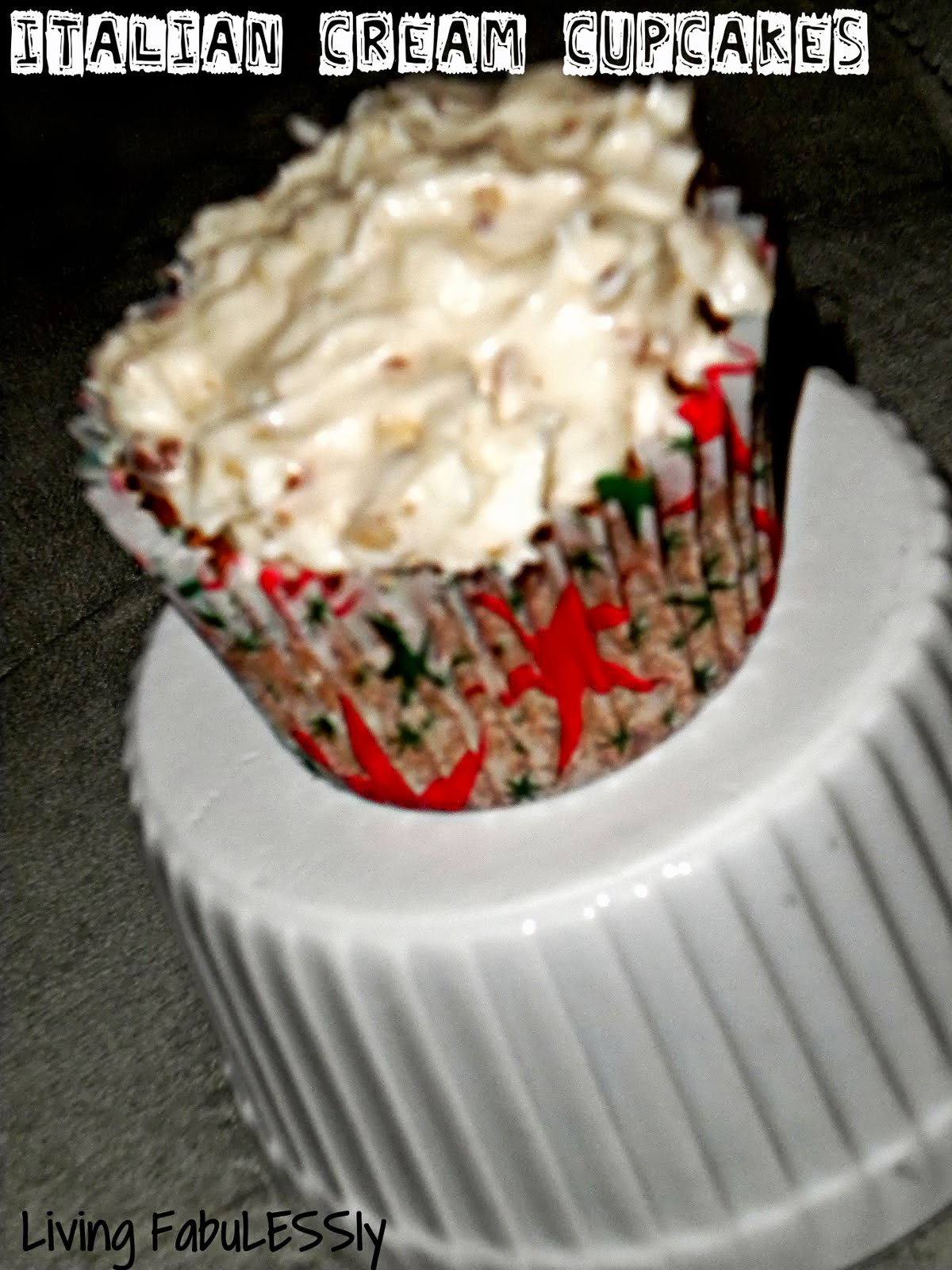 I’m not entirely sure I love how they turned out. I think they had entirely too much butter in them and I never thought I would ever hear myself say anything could ever have too much butter- but these were just a bit too heavy on the saturated fat end. I’m going to have to play around with the recipe some, because I will definitely make them again, but it will need some tweaking to suit my taste. However, I do think it’s worth you attempting these if you love vanilla, coconut, and cream cheese…. and butter…. lots and lots of butter.

When it came time to feed my sourdough starter for the week, I knew I wanted to use the amount I poured off for something special but I wasn’t sure what. (I’ve made all sorts of things with my starter but have yet to actually try my hand at sourdough bread- I’m not sure what exactly I’m afraid of….) In any event, I stumbled across a recipe for Sourdough Cinnamon Rolls (at WhatsCookingAmerica.net) and thought ‘How could I not?!’ I followed the recipe to a ‘T’ but I still had major issues. I ended up with a supremely sticky dough, but this was partly (ok…mostly) my fault because I didn’t watch it while the bread machine did its thing (and due to the fact that I have a really watery starter compared to some). Also, I don’t think the recipe called for enough filling- there was a big discrepancy in the bread to filling ratio. And even though I tried to be diligent, greased my pans and everything, I still wound up with burned bottoms! However, I did get an amazing rise from these babies and they had a distinctively delicious taste that can’t be found just anywhere and most certainly not in a Pillsbury can!

Lastly, thanks to some leftover baked sweet potatoes from dinner the other night, I decided to try my hand at sweet potato biscuits (from HomeCookingMemories.com). Now, something you need to know: my whole life growing up my mom has been known as the queen of biscuits (at least in my head she has). She makes the fluffiest, most amazing biscuits (homemade, mind you) that puts even those at Cracker Barrel to shame. For reals! So, I knew going into this that mine weren’t going to even come anywhere close- but I decided to try it anyway (I had to do something with those sweet potatoes after all!)

I followed the recipe perfectly but for some reason they came out dense as all get-out, I just didn’t understand it. Finally, I put 2 and 2 together. I had subbed in some of my AP flour with bread flour- rookie mistake! (Guess I should have stayed in culinary school after all, eh?) Apparently, bread flour is good for things like…you know…baking bread. But when you’re looking for tender, flaky, and light…well, bread flour ain’t where it’s at- AP is what you need. Oops.

Either way, they have wonderful flavor-very reminiscent of fall. I’ll let you in on a little secret though- these are meant to be made with leftover sweet potato casserole from Thanksgiving (which will naturally be all buttered, and sugared, and flavored up). I realized this right about the time I was cutting out the biscuits. Luckily, I had remembered to add in some brown sugar for added sweetness but failed to add any cinnamon, allspice, nutmeg, etc. Needless to say, they were a bit lacking in the spice department.{Sigh} So, I’m already anticipating my mom’s life-altering sweet potato casserole this Thanksgiving so I can make these again (without the bread flour this time!) and hope they turn out so very much better. 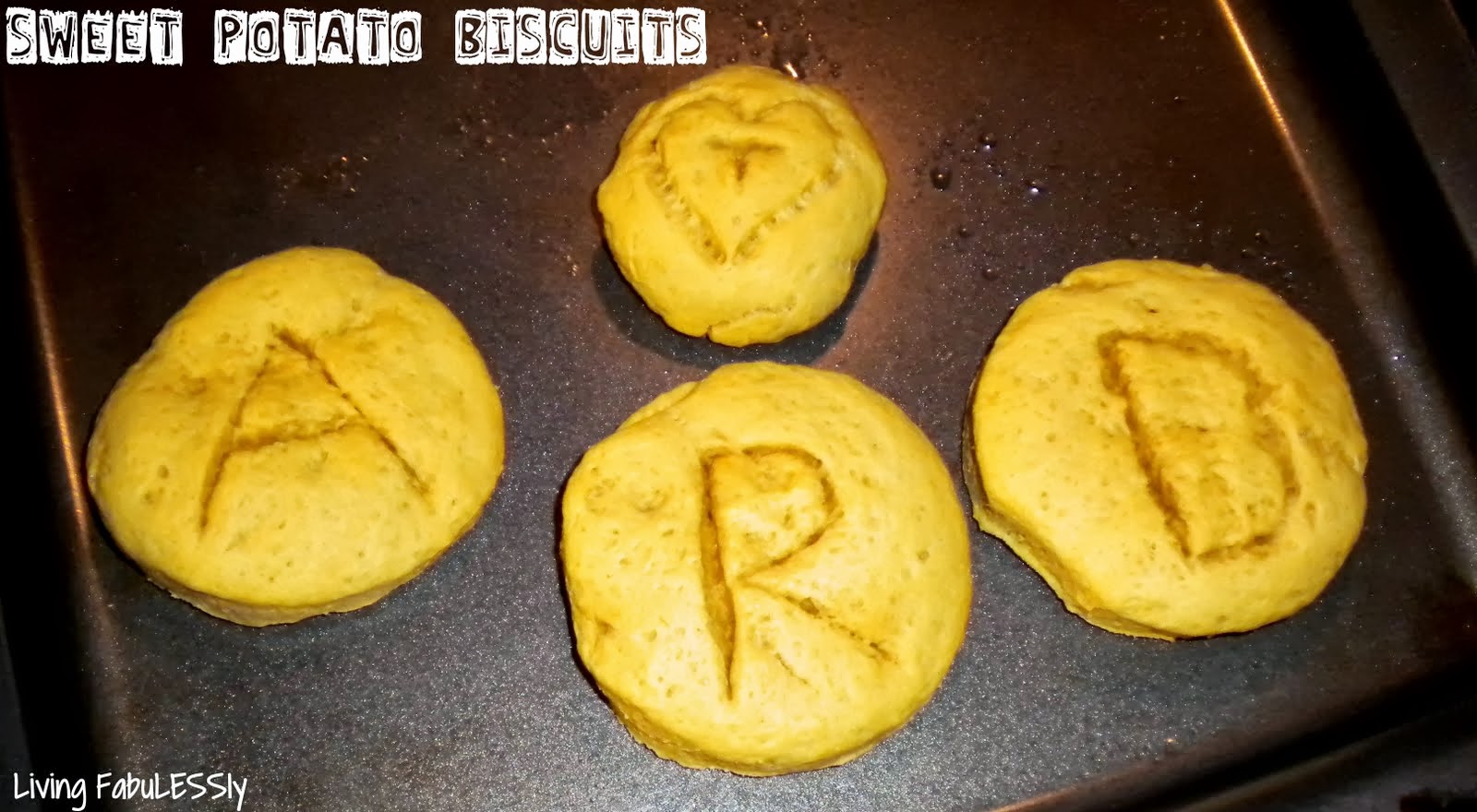 As I was waiting for the first batch to bake, I had just a few left and the final few scraps to make a teeny, tiny biscuit. I decided to shape it for Tara (our teeny, tiniest family member whom we call Sissy) and created a cute little ‘Sis’cuit! With time to kill, I used a small paring knife to carve a heart and her initial into her ‘siscuit’. Not wanting the other kids to feel left out, I carved their initials into biscuits too! Everyone was so excited to eat their own personal biscuit at breakfast this morning and each felt special in his/her own way. And nothing makes you feel any better than a sweet little voice saying, ‘Thank you for the biscuit, Mommy’. So, if you ever need a way to feel like an awesome mom in a minimal amount of time- grab a paring knife- it’s a breeze!

Hope y’all enjoyed my forays into baking this week and found yourselves at least slightly inspired (if in no other way than to not make my mistakes!) 😀

Til next time… may the fork be with you!

WIAW-#1 (What I Ate Wednesday)

This site uses Akismet to reduce spam. Learn how your comment data is processed.

Let’s Talk About Me!

Me in a nutshell: stay-at-home wife and homeschooling mom; Christ follower; slightly obsessed (ok, fully obsessed) with food blogs; constantly insane thanks to 3 kids; always ready for a party (or a stiff drink); handy with a glue gun (not so much with a needle); good for a quick laugh.

If you'd like to know more about me and the gang that helps me keep it real, get to clickin'! I look forward to seeing you around the blog!

WE DID IT!! Time to find another puzzle to do! #r

Puzzling it out with this guy...love afternoons li

Sissy made dinner tonight and earned part of her #

Headed out to the #companychristmasparty Thanks @g

Load More... Follow on Instagram
This error message is only visible to WordPress admins
This endpoint has been retired

Buy Me Some Wine!